The adhesive mousetrap sheet is furnished with a strong adhesive used by professional rodent exterminators.

Useful for the elimination of mice and rats that cause all kinds of damage such as power outages resulting from biting damage as well as feeding damage, food poisoning and the spread of contagious diseases and viruses.
The sheet attracts the mice with a peanut smell and firmly traps their paws with the bumpy coating of strong adhesive.
The product is provided with vertical and horizontal folds so that it can be set in anyplace.

The adhesion of the product remains the same regardless of the temperature and does not discolor or run out.

The adhesive is nontoxic. Follow the procedure below if the adhesive attaches to the body or clothing.

Method of Use of Powerful Adhesive Mousetrap Sheets

Since mice get into houses from the outside in almost all cases, the first step is to block all possible points of entry from outdoors.
Set Powerful Adhesive Mousetrap Sheets in places where mice are observed to frequently appear.

Store Powerful Adhesive Mousetrap Sheets in a place out of the reach of children where they will not be exposed to open flames.

If adhesive attaches to the body, clothing or pets

Sprinkling powder on the adhesive or soaking it in oil will reduce adhesion.
Follow the procedure below to remove adhesive.

*Use white kerosene in a safe place where it will not be exposed to open flames.

Points to remember regarding extermination of mice

It is known that there are more than approximately 20 types of mice and rats in Japan.
Of these types, the following three are commonly found running around.

Effective Method of Use 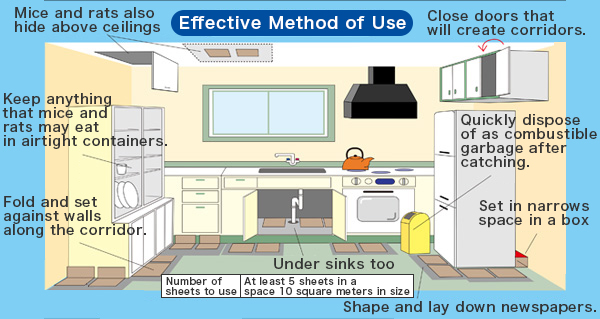 There are no related items yet.